Dilip Donde‘s story of how he sailed around the world solo.

This is a firsthand account of the first Solo Circumnavigation under sail by an Indian in an Indian built boat; something that had never been attempted in this country of over a billion people. The book chronicles, Dilip’s progress over a period of four years. Years in which he built a suitable boat with a boat builder who had no past experience in sailboat construction. While also weaving his way through the ‘sea blind’ and often quixotic Indian bureaucracy. He also trained himself since there was no past precedent or knowledge base on the subject in the country. And finally, he sailed solo around the world, with four stops en route.

The book thus is the story of an individual undertaking a path breaking venture in more ways than one. While also working in a system that had very little idea as to what he was doing and at times was convinced that he would fail.

The book has also been converted to an audio book for the visually impaired by the National Association of Blind (NAB), Mumbai.

An audio version recorded in Dilip’s voice is now available on Spotify and Google podcast. This was shared a chapter at a time during the lockdown in India in May 2021.

The Marathi translation, released on the 10th anniversary of Dilip’s setting out on his circumnavigation, 19 Aug 2009,  is now available  on Amazon, Flipkart and with the publisher 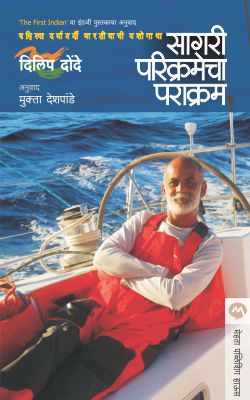